Poland. A town on the lower Vistula in the Voivodeship of Bydgoscz.

The originally Slavic settlement was obtained by the Order of Teutonic Knights in 1231; in the 14th and 15th centuries the town became a member of the Hanseatic League, a trading association. The history of the town is accompanied by the disputes and conflicts between the Teutonic Knights and the Polish residents. The First and Second Peaces of Toruń brought Poland territorial gains (Western Prussia, Gdansk). Toruń fell to Poland, and Eastern Prussia became a Polish fief. During the Reformation Jesuits settled in the town. The later history of the town, which in the 16th century saw economic improvement, was influenced by the Swedes: the First Northern War (1655 – 1656) inflicted heavy damage. Disputes between Catholics and Protestants persisted, and brought misfortune on the town and its residents. For a long period the town was also the subject of political negotiations between Prussia, Austria and Russia. The name of the local university recalls that of a famous native son, Nicolaus Copernicus (1493-1543), the astronomer, mathematician and doctor, and author of a heliocentric cosmological theory. The manuscript of his “On the Revolutions of Heavenly Spheres” (De revolutionibus orbium celestium) was brought by Comenius when he returned from studying in Germany.

Comenius stayed in Toruń on several occasions: youth of the Unitas Fratrum studied at the Protestant school, where he oversaw their academic and moral success as secretary of the congregation. In 1645 Comenius attended the Colloquia charitativa, which was intended to resolve the differences between Catholics and Protestants; this meeting was not, however, successful, and Comenius moreover had to bear the stinging rebukes of Ludwig de Geer. 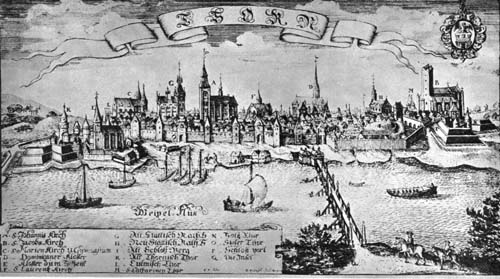