United Kingdom of Great Britain & Northern Ireland. Capital city on the river Thames. Seat of the monarchy, government and centralised organs and institutions.

In the first century AD the Romans founded a centre for the province of Britannia, called Londinium. From the 7th century the town was the seat of the Anglo-Saxon Kings of Essex, and from 1066 it was the seat of the King of England. At the end of the 12th century an organ of self-government was created for London – the Council. From the 16th century onwards the city was the largest port in England. During the English Civil War the Commonwealth was proclaimed in London, in May 1649.

In 1641 Comenius came to London at the invitation of his adherents and admirers, the “Comenians”. The outbreak of the Civil War in 1642, together with the dispersal of Comenius’ admirers into different political camps, mitigated against his carrying out the planned reform of education and the sciences. Comenius’ outstanding Via lucis was however a fruit of his time in England. 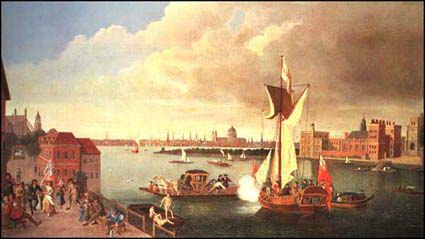