Origin of the work:
1666 Amsterdam

Editions:
1667 Amsterdam (as an addendum to Serarius’ polemic against an anonymous Cartesian author)

A tract by Comenius against Cartesianism, in the form of an assessment of a polemic work by Petrus Serarius, at the same time directed against the polemical treatise of Ludwig Meyer. When in 1644 the philosopher René Descartes’ work Principia philosophiae (Principles of philosophy), was published, his teachings attracted more and more adherents, but also opponents; among these opponents was Comenius. Theologians (particularly from the Reformed churches) saw Cartesianism as a threat to faith and religion. Descartes himself did not draw consequences from his philosophy against the Church, and from caution acknowledged divine Revelation as incontrovertible truth, and did not declare philosophy to be the true interpreter of Scripture. This requirement was taken up by his and Spinoza’s friend, the Amsterdam doctor Ludwig Meyer, in a treatise published anonymously and entitled Philosophia S. Scripturae interpres; exercitatio paradoxa... (Philosophy the interpreter of Holy Scripture; a paradoxical exercise...). Petrus Serarius, a chiliast close to pietism and to Comenius, fell upon Meyer’s anonymously published work in the polemic Responsio ad Exercitationem paradoxam anonymi cujusdam Cartesianae sectae discipuli... (Response to the paradoxical exercise of some student of the Cartesian sect...).

Serarius requested a judgement on his work by Comenius. The latter wrote an assessment and his opinions of Cartesianism, which are known under the title De hoc viri doctissimi scripto amice requisitum sincereque datum judicium (An amicably requested and sincerely given judgement on this tract by a most esteemed gentleman). In his judgement, Comenius agrees with Serarius, who leads people away from worldly wisdom, which is the Devil’s snare. If God’s law is given us as the norm of faith, then human wisdom is unnecessary. Comenius likes Descartes’ attempt to free himself from preconceptions, and that that he is seeking a new path. The question, however, is whether he has actually found one. He acknowledges the mathematical results attained by Cartesian philosophy, even if they do not resolve the question even of the quadrature of a circle or of perpetual motion. Even the Cartesian “Cogito, ergo sum” (“I think, therefore I am”) does not offer a person complete certainty. In Comenius’ view, Descartes has arrived at an erroneous, rational conclusion, whereby he has not paid sufficient attention to experience and revelation. In dealing with things he passes over the will of God, from which their purpose comes, and deals only with their origin and phenomena. Had he enquired into revelations, he would have realised that those things which are here are for Man.

Comenius also sees inconsistency in Descartes’ understanding of motion, that it is directly caused by God. This is like the childhood opinion by which Comenius explained the colour of a flower to a twelve year old fellow pupil by saying that colour passed from one flower to another. Later, however, he came to realise that God created the light in which the flower developed. The situation is similar with motion. Comenius then refutes several parts of Descartes’ physics, in particular his theory of heat, as evidence of the latter’s confused teaching.

While Comenius erred, this work is regarded as one of the best treatises against Descartes, and at the same time complements our impressions of Comenius as a pansophist. 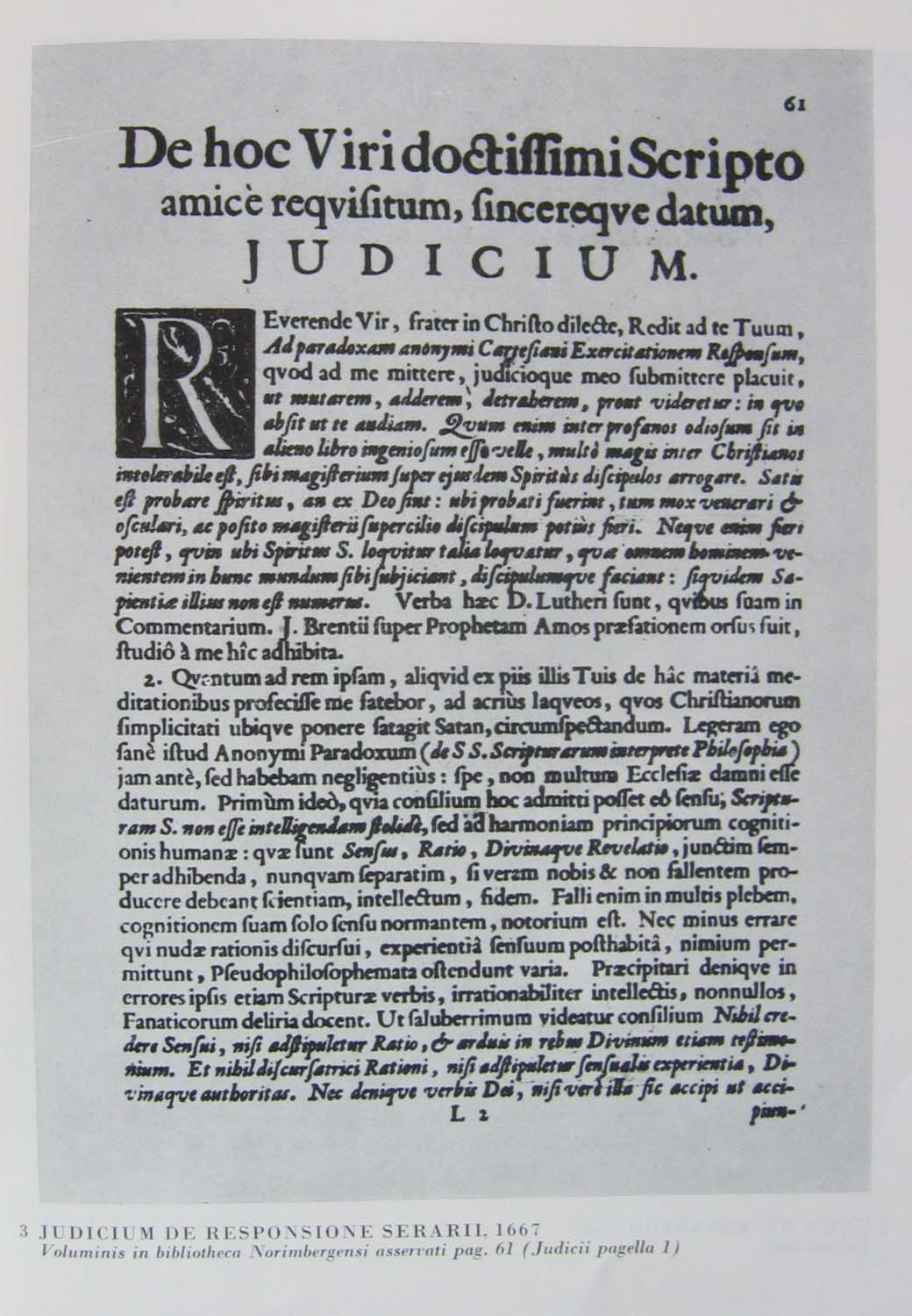