Frederick V of the Palatinate

also Frederick of the Palatinate, the Winter King

King of Bohemia (1619 – 1620, known as the Winter King) and Elector Palatine, of the Wittelsbach dynasty.

Frederick stood at the head of the Protestant Union (an association of Protestant German princes) and anti-Habsburg policies. In 1619 he was elected King of Bohemia, but he lost Bohemia at the Battle of the White Mountain in November 1620. After the defeat he found refuge in Wroclaw, from whence he attempted to direct the further course of the conflict. In the course of the Palatine Wars (the Thirty Years War) he lost his family inheritance, and in 1623 Emperor Ferdinand II. Habsburg gave the Palatinate and the rank of Elector to Duke Maximilian I. Frederick departed for the Netherlands. In 1631 he joined the Swedish King Gustav Adolph II; the following year, he died at Mainz. 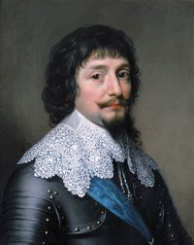