Dedicatory epistle to books by Fortius and Erasmus

Fortius encourages work and determined study. In school, the pupil should, alongside the trivium (grammar, rhetoric and logic) and the quadrivium (the branches of mathematics, i.e. arithmetic, geometry, astronomy and music), also gain a knowledge of Greek, history, cosmography and geography, as well as of laws, medicine and theology. Studies should culminate in written work on themes from these given areas. He advises on how the times of day and night might be spent, recommending that idleness be avoided, exercise and travel. Erasmus’ treatment is in two parts. The first speaks of knowledge of things and words; it is necessary to learn Latin and Greek grammar and to on the basis of readings from the authors to learn eloquence and style. It is important to train the memory and to memorise. In the second part he sets out the classics that must be read, and gives subjects from spoken and written exercises.

Both Fortius’ and Erasmus’ works were published by Comenius in a single volume in the Rákoczí book printworks at Sárospatak, under the title Ioachimi Fortii Ringelbergii De ratione studii liber vere aureus (Joachim Fortius Ringelberg’s truly golden book on methods of study). The foreword was included under the title Omnibus per gentem Hungaricam bonarum literarum studiosis, e nobilitate et aliis, sapientiae amorem optat J. A. C. (To all of the Hungarian nation, the nobility and others, who aspire to a thorough knowledge, a love of wisdom is wished by J.A.C.). He proscribed it to his students at the local school as one of the means by which they might be roused out of their indifference. He first welcomes the fact that several who have read Fortius’ books, which they obtained from Comenius, had requested that they be printed and distributed more widely. Comenius accepts this stimulus gladly, and emphasises that he will be happy if other good books also find themselves at home in Hungary. He calls on students as both pupils and adults to assist in their publication, and to fill scholastic, artistic and scientific institutions with them so that they might always have them to hand themselves, that they not only organise themselves by such books, but that by competing among themselves in such things they will encourage themselves and their fellow citizens to wipe slackness and idleness out of Hungarian society. 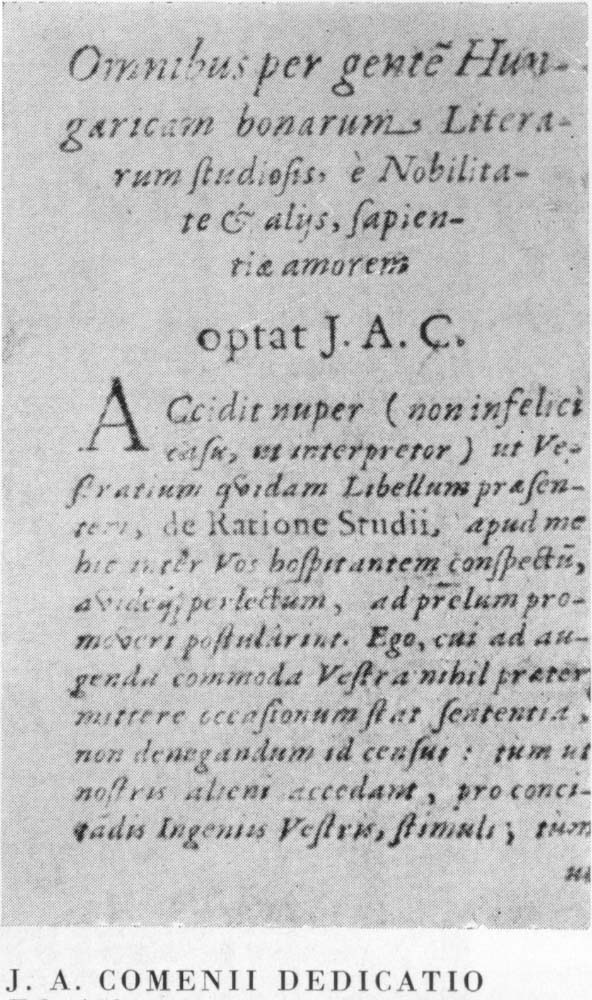