The Didactic, that is, the Art of artificial education. By which a person may, before their body is full grown and he has entered into his state, might in all that is necessary and appropriate for this and the next life be fittingly, happily, easily and fully educated and thus be pleasantly equipped for both lives. Which is all powerfully, with foundations drawn from nature itself, shown; continuously explained with examples from other crafts; perfectly measured out by the years, months, days and hours; and to all that, that aims might be achieved, providing an awakening and giving advice.

Under the influence of Johann Valentin Andreae and Wolfgang Ratke, as well as of the pedagogico-didactic works of Elias Bodin, Comenius was driven to an interest in education and teaching. This grew when Jan Amos became a teacher at the gymnasium in Leszno. His readings of the accessible, less important pedagogical literature of the time and his consideration of the insufficiencies in schooling of the period, as well as his own experience as a teacher, led Comenius to decide to create his own work on education and teaching, which would rebuild contemporary pedagogy, didactics and education as a whole on new foundations that were to be as deep as possible. In this, Comenius was also tracing the idea of reforming Czech education after the hoped-for return of the exiles to their homeland. This was how his Didaktika, written in Czech, came to be, intended to be part of a planned, great pedagogico-didactic encyclopaedic work entitled the Paradisus ecclesiae renascentis (The Paradise of the Church renascent). Comenius’ Didactica in Czech may not have brought any entirely new or original ideas, but it excels over other pedagogical works of the time in its attempt to create a scientific system out of pedagogy, and with the aid of its methods to establish lively rules and laws of work for educators. The word “didactic” had a broader meaning than is the case today.

It meant roughly what the term pedagogy now covers. The greatest priority in the work was given to the social perspective: education should be received by all, with no distinction made as to gender, social class or property. The Didaktika comprised four parts: 1. general pedagogy (the philosophy of education), 2. common didactics, 3. methodology and 4. the organisation of schooling. The author starts from the assumption that the shoots of educability are present in all people. These are brought to flower by education. The education of children is an obligation of the parents; this however is not by itself sufficient, and thus it is necessary to have organised schools. Education should be universal; all young people should learn all that is necessary from knowledge, morals and piety, without compulsion and toughness, via a path that is natural and simple. “That everything be self-evident” was Comenius’ motto. Teaching was to be conducted on the syncretic method (by comparison, through analogy), a characteristic of which is realism, the cyclic method (always everything, with ever increasing circles at the higher levels), and the inductive method, representing the advance from the near to the distant, from the known to the unknown, from the specific to the abstract, all in a common (national) school on the basis of the mother tongue. The word and the thing should be learned together. Teaching should be on the basis of object lessons, i.e. pupils should observe things directly, and if this is not possible then with the use of aids that resemble the actuality to the greatest possible degree (pictures, maps etc.). Teaching is not possible without discipline, but the discipline should be humane and not drastic. Finally, Comenius requests unification of the organisation of schools into four levels over six years: 1. to the sixth year of age, the education of children in the family (the kindergarten school), 2. to the twelfth year of age, a common (national) school with teaching in the mother tongue, 3. to the eighteenth year of age the Latin (middle) school for selected young people, and 4. to the twenty-fourth year of age schooling at a higher level (academies and universities), in conjunction with travelling.

The Didaktika is the most important of Comenius’ pedagogical works written in Czech. It never reached print during his lifetime, despite being prepared for publication. The manuscript was found at Leszno in 1841 by the Czech evangelical preacher Josef Kačer, who brought it to the attention of Jan Evangelista Purkyně, then a professor at Wrocław University. It was first published in 1849. Cf. the entry for the Didactica magna. 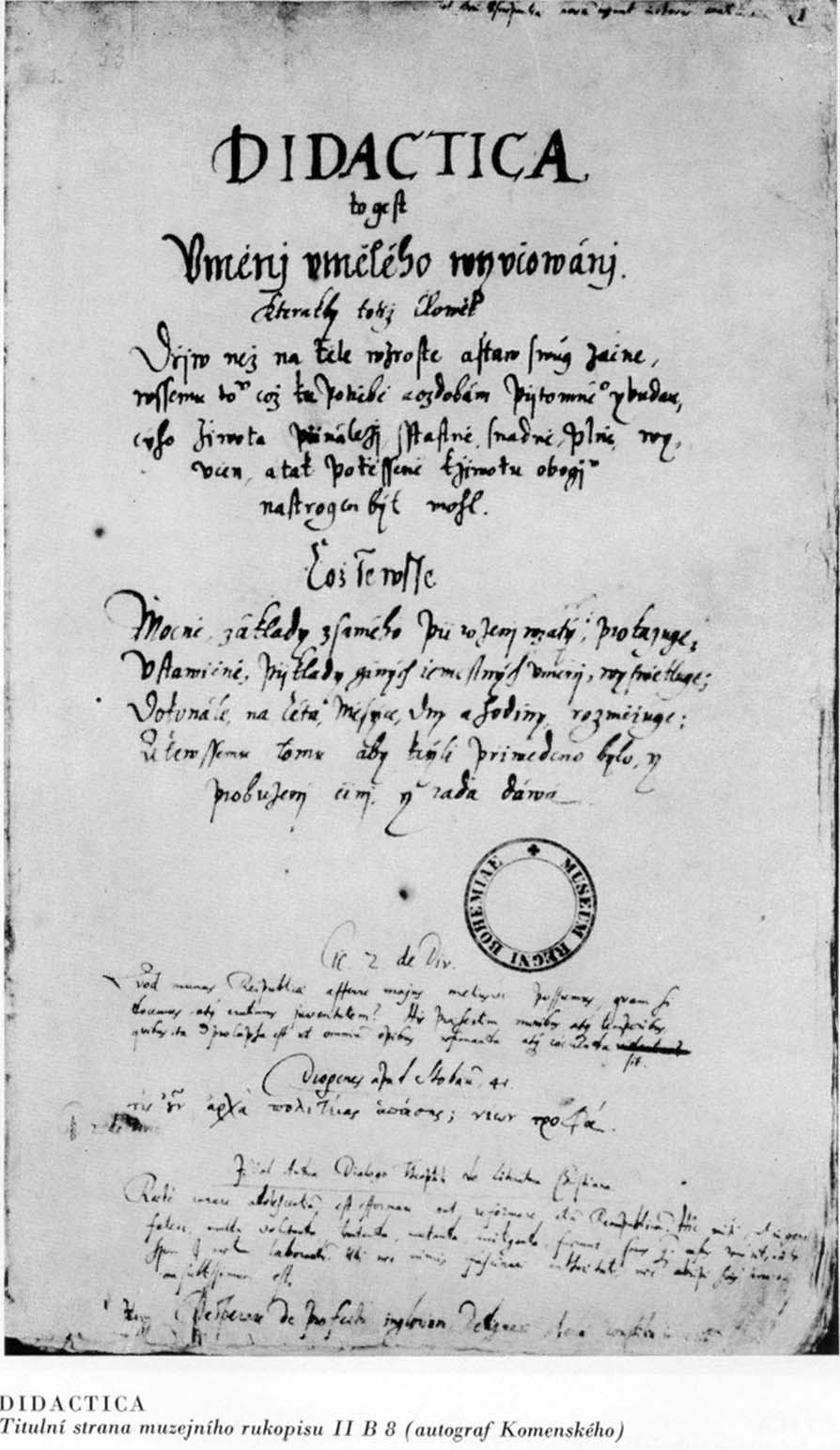