A didactic dissertation on the study of the Latin language, which may be successfully completed in four stages, comprising the Vestibule, the Door, the Palace and the treasury of Latin. For the needs of the educators of the young, instruction is attached on the correct use of the Vestibule and Door, published previously

Editions:
1638 (Wrocław), place of publication not given

Comenius wrote this dissertation when the people of Wrocław decided to use his textbooks for Latin, the Vestibulum (the Vestibule) and the Janua linguarum (the Gate of Tongues) in their schools; the essay was intended to serve as a guide to the use of these books. Comenius’ pedagogical and didactic opinions were still developing; he was not satisfied with the first editions of the Gate of Tongues and the Vestibule, and decided to re-work them.

Further, it was his intention to present the teaching of Latin in accordance with his Great Didactic (the Didactica magna), that the four ages (early childhood, later childhood, adolescence and adulthood) were matched by four levels of Latin tuition, with the aid of the textbooks the Vestibulum (the Vestibule), the Janua linguarum (the Gate of Tongues), the Palatium (the Palace) and the Thesaurus (the Treasury) of Latin. The division of the material was to be such that the Vestibulum would provide the foundations of grammar and vocabulary in short sentences, and the Janua grammar in regular forms and common words in simple sentences following descriptions of the matter discussed. The Palatium was to be a more thorough explication of the Janua with an emphasis on expression in a higher (literary) style, while the Thesaurus was to contain readings from selected authors. Because only the Vestibulum and the Janua were complete with a methodological guide attached, the textbooks for the other two levels , i.e. the Palatium and the Thesaurus Latinitatis, were yet to be completed. Meanwhile, he set the period of study of the Vestibulum at half a year, of the Janua a year, of the Palatium a year and a half and of the Thesaurus three years, giving a total of six years of linguistic study. It was his contention that Latin be taught in four classes; academies (universities) would conduct their own expert tuition. The later third Latin textbook took the name the Atrium rather than the rather grandiose Palatium. 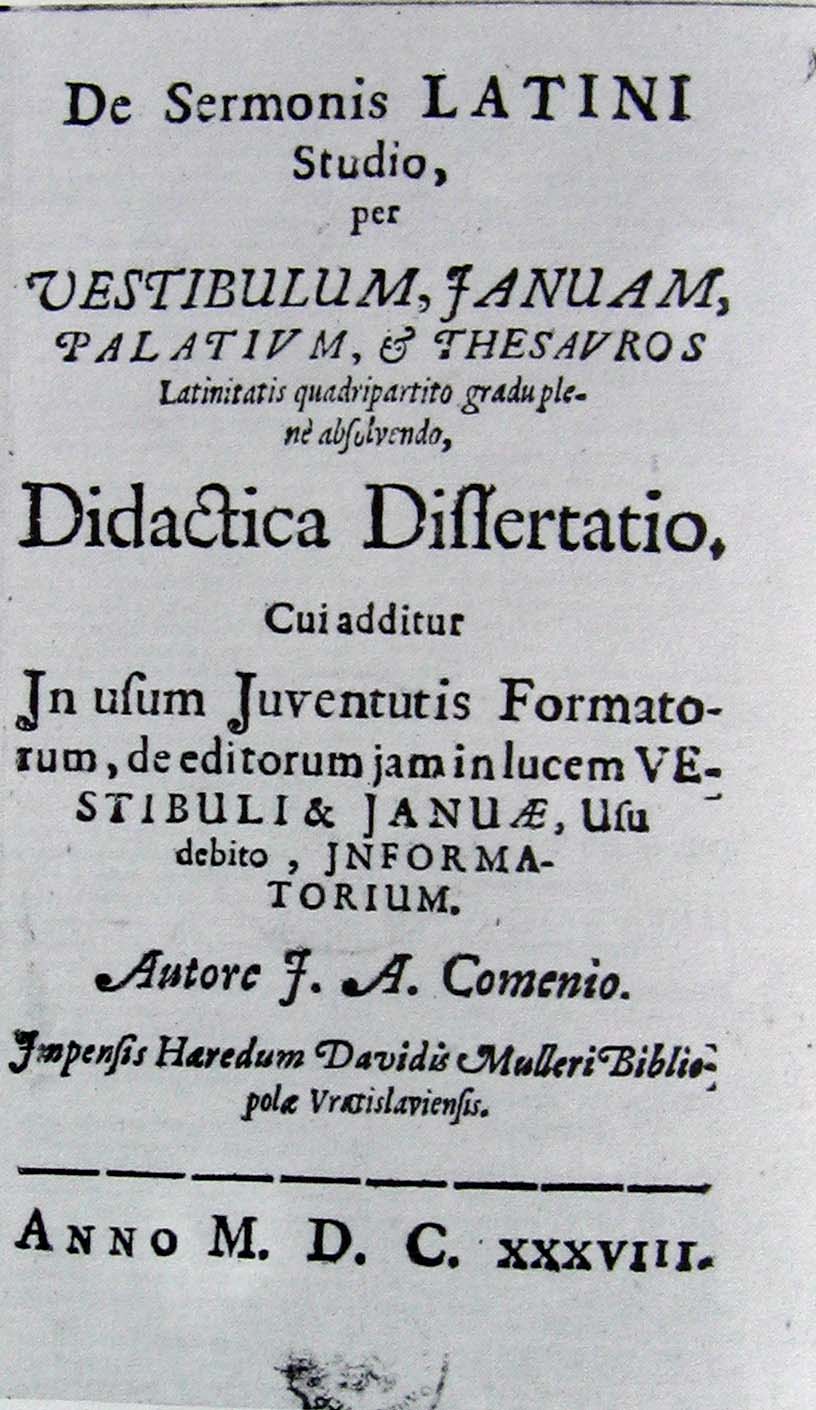