The Judgement of J.A. Comenius on the controversy surrounding the ceremony of the first and last acceptance of the Bread and Chalice at the Last Supper, and on the contention arising therefrom. Written at the command of Her Highness the Princesss of Transylvania

Origin of the work:
1654 Sárospatak

A judgement on the debate in the form of a tract regarding several elements of ceremony at the Lord’s Last Supper.

Having arrived in Hungary, Comenius found that the debate between the Anglicans and the adherents of the principles of Robert Browne (known as the Brownists, Independents or Congregationalists) had permeated the Reformed environment at Sárospatak. This was further manifested in the particular question of the means of communion in remembrance of the Last Supper. The older Calvinist direction was represented here by superintendent Ferenc Veréci, the spiritual administrator and head of the Sárospatak administrative district, while the newer Congregationalist views were propagated by the Court Preacher Pavel Medgyesi. The prince’s widow Zuzana Rákóczi-Lorántffy asked Comenius to produce an assessment of the debate.

This was an unwelcome development, because not long beforehand he had published the Independentia at Leszno, in which he had labelled the English Independents the originators of the disorder in the church, thereby placing him at Sárospatak in a delicate situation between the feuding sides. In his assessment, Comenius states that Medgyesi had decided that of the elements of the Holy Banquet (the Supper) it was necessary to keep the Elevation and acceptance of the sacraments until after the first and ceremonial proclamation of the words (This is My body, this is My blood), but that the words of the teaching belong directly to the act of the individual division of the sacraments. The reasons supporting this contention are eight, which however may summarised into three, specifically:

2. The method to date is superficial and has no justification behind it.

3. It stems from the Papacy, and is therefore an anti-Christian ceremony.

Comenius’ commentary on this is essentially that:

Ad 1. We have a report on how Christ acted. He did not accept the Bread and Chalice twice or more, but only once, and did not declare the words of the teaching twice or more either. Therefore, he that accepts communion twice or pronounces the words of the teaching more than once does ill – and this is just what the worthy Medgyesi is doing. The most reliable method might, perhaps, be the original practice of the BohemianChurch, where the liberating words of Scripture are pronounced by the priest after the confession of sins and repentance; before the eyes of the whole congregation he then breaks the bread, taking it to the chalice and elevating it slightly. After this blessing, he adds a short explanation of the mystery to lift up the hearts of the faithful, after which all those gathered partake of the sacraments in both kinds, that the act not be disturbed by words. Afterwards, those assembled sing a hymn praising the redemption from sin. Only in exile did the custom arise that the sacrament was not performed in silence, but after the manner of other churches was an expression of faith made while accepting the sacrament. Even so, the words of the teaching are not repeated in a new blessing, but only the apostolic words of the faithful, recalling the mystery of the new communion and one being with Christ (1 Kings 10, 16).

Ad 2. In his second reason, Medgyesi holds the rite used hitherto as erroneous, because it allegedly has as its aim merely an external expression of praise. In his view, the blessing of the elements in this way does not change in the sacrament of the words of the teaching according to the Testament, but the whole act. Comenius replies that the joining of the words to the act achieves the act of sacrament.

Ad 3. To the third argument, that the older rite stems from Pope Honorius, and that it is thus anti-Christian, Comenius shows that even several centuries before Honorius and the split from the Latin Church this ceremony was known to the Greeks, and had remained unchanged among them. Only with the growth of superstition was the rite disturbed. The esteemed Medgyesi is, in his fervour, like the English Brownists, who argue the same way. While people may decide to add something to the holy rite, it is not possible to change or limit the Papal ceremony. The esteemed Medgyesi has already condemned the autochthonic for vacuity, and the introduction of the conjoined rite as anti-Christian; Comenius disagrees with this, citing in this matter the Dutch theologian Ghisbert Voetius. He encourages moderation, however.

In closing his reply to Lady Zuzana, Comenius emphasises his unenviable position between the quarrelling sides at Sárospatak and sees his departure from thence as the solution to this problem. He merely asks God not to withdraw His spirit from the Princess Lorántffy.

The tract is valuable in that it provides details of the rite of communion used by the Unitas Fratrum. The work has survived in a copy now held by the manuscripts department of the Public University Library in Vilnius. 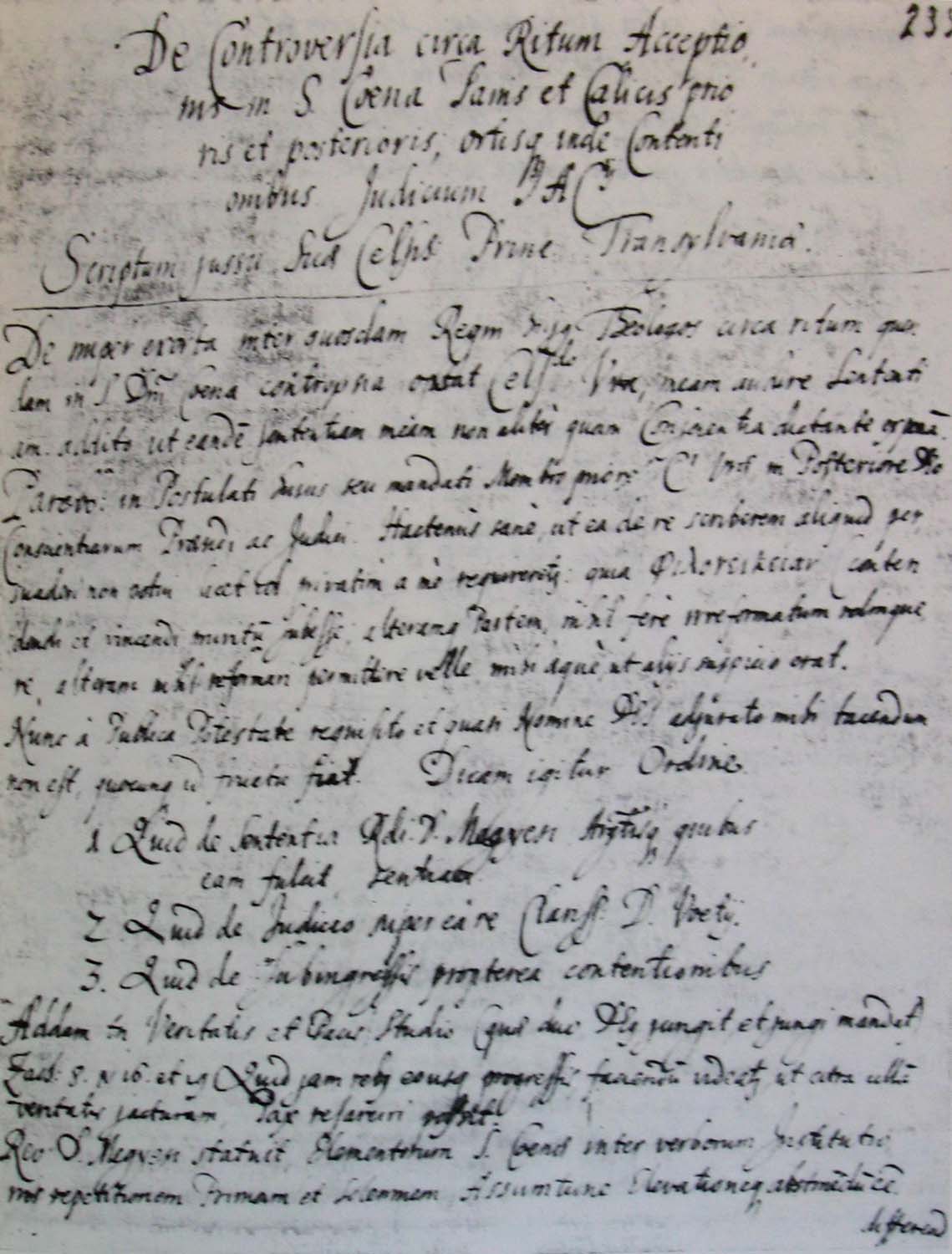 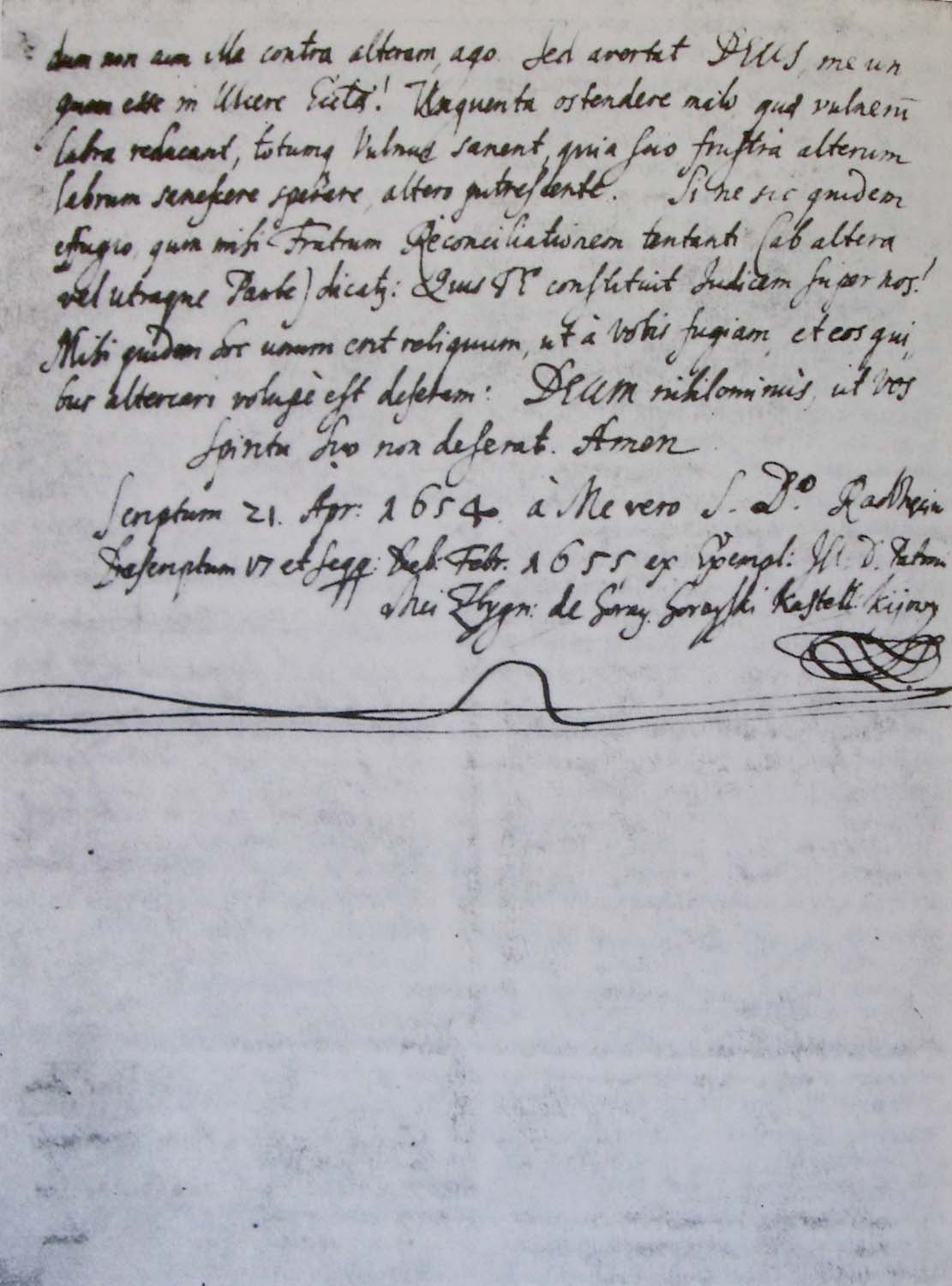