General consultation on the improvement of human affairs, to the race, but before all to the men of learning, clerics and potentates of Europe

Comenius was seriously dissatisfied with the discord and wars between nations and religious organisations, as well as with the degeneracy of morals in the society of the time. He thus began, in 1645 while at Elbląg, to write a remedial work, the General Consultation, in which he called upon rulers, ecclesiastical leaders, the learned and humanity as a whole to be of good will, that they might unite in their efforts to rectify the decay in life, set aside war and live together in harmony. Of the intended work in seven book, by 1935 the Panegersia with the foreword to the Panaugia were known, these having been published anonymously during Comenius’ own lifetime, without neither the author’s name, the printers nor the year and place of publication being given. He had continued to work on it, albeit with breaks occasioned by his participation in political and religious affairs, and by the creation of other pedagogical, pansophic and irenic treatises.

During the period of his third residence in Poland the final shape of the Consultation had already been traced, when the fire of 1656 caused Comenius’ great losses, among which were not only his great dictionary of Czech (the Thesaurus), but also the fair copy of the prepared General Consultation, to which in his own words he had devoted the last twenty-five years of his life. The teacher of nations was able to save only part of the draft and the rough copy. Nevertheless, the indefatigable Comenius resolved while in exile in the Netherlands to renew the planned work, and to finish it in full measure, even if it had been delayed by the publication of the Complete Didactic Works (ODO) and other matters. After his arrival in Amsterdam he published the Panegersia and the Panaugia, and worked on the remaining parts at the beginning of the 1660s in particular. Shortly before his death the work was finished in rough, but the final wording of some parts had yet to be gone through. That Comenius attached exceptional importance to it is attested by the fact that under the threat of the Last Judgement he bound his son Daniel and Kristián Vladislav Nigrin to bring the work into print. This, however, never happened, as the requisites for the filling in of the gaps existing in the work were not to hand, and perhaps also because the de Geer family did not wish to bear the responsibility for the chiliastic opinions contained in the work (chiliasm). In 1702, the Panegersia alone was published at Halle with a foreword by Johannes Franciscus Buddeus, but later the work fell into disregard and only in 1935 was the entire text found in the archive of an orphanage at Halle by the Ukrainian professor and Comeniologist Dmytro Čyževśkij. Only extracts were subsequently made available in Czech translation. The complete Latin text was published in 1966 by the (then) Czechoslovak Academy of Sciences in Prague. A complete Czech translation of the Consultatio was published in 1992 to mark the 400th anniversary of Comenius’ birth.

The foreword begins with the salutation Europae lumina, viri docti, pii, eminentes, salvete (To the light of Europe, men of learning, piety and eminence, greetings) and contains the dedication of the treatise to the foremost men of Europe, with a request for their support in a pan-remedial work – the religious and moral uplifting of the world. The author speaks of the Consultatio as a new endeavour with the highest aim, which while being beyond human strength must nevertheless be attempted for the love of humanity; he wishes to present this in seven parts.

Subsequently the outline of the whole work is given, and details are provided as to how the aims are to be achieved. Comenius calls on men of learning to assess the work from a neutral perspective, and also turns to clergy and rulers for aid in the realisation of the aims, he being firmly convinced of their general benefit.

The seven books into which the work is divided are:

1. The Panegersia (The Book of Universal Awakening), which is to awaken the reader to the need for change. It shows the infringements that have crept into human affairs, and demonstrates the possibility of attaining the promised renewal. To this end new paths are of course necessary, i.e. the paths of unity, simplicity and voluntariness. Many parts of this book are written very forcefully.

2. The Panaugia (The Way of Universal Enlightenment), in which Comenius provides a comparison on the syncretic method between education and illumination, and extrapolates from this the path that an enlightening work should take. This book is not as forceful as the Panegersia. The motif of light appears in others of Comenius’ works as well, e.g. in the Via lucis (Way of Light).

3. The Pansophia (Universal Wisdom) is a working up of knowledge in the narrow sense, i.e. of the teaching segments. It is imbued with a secular, pansophic opinion that is treated in the form of several worlds, specifically the mundus possibilis (the world of the possible – containing metaphysics, i.e. basic concepts and the means by which they are linked to one another), the mundus idealis seu archetypus (the world of ideas or archetypes – eternal intellect and its conceptions, which are the pattern for the other worlds), the mundus intellectualis, angelicus (the spiritual or angelic world – angels being an intermediate stage between God and Man), the mundus materialis (the material world – Man and the world around him), the mundus artificialis (the world of human artifice, by which Man conquers nature), the mundus moralis (the moral world - ethics and the cultural activity of mankind), the mundus spiritualis (the spiritual world - the relation between Man and God) and the mundus aeternus (the eternal world – providing the most detailed description of the pansophic system).

4. The Pampaedia (The Universal Refinement of the Intellect) is the last, most extensive pedagogic work by Comenius. While it affirms the educational plan divided into four stages given at the end of the Great Didactic (Didactica magna), it expands this by the addition of further stages so that learning does not cease in the twenty-fourth year, but only with death. In addition, a pre-stage is also added, so that the whole extent of the organisation of schooling appears thus:

1. the school of childbirth, i.e. instruction for parents on how to care for children before birth, for successful development in the womb;

2. the kindergarten – a proposal for a kindergarten for children up to the age of 6 years, in the modern sense;

6. the school of manhood or life’s practice;

While not as persuasive as the Didactics, this book is nevertheless a valuable addition, at least for readers familiar with the Didactics.

5. The Panglottia (The Universal Refinement of Languages) considers the nurturing of languages in general and the need for a new, artificial, universal language. Comenius sets down the universal requirements for such a new language: precision, clarity, regularity (no exceptions), economy (there should be only one declination and conjugation) and pansophy. Specific examples are given for Latin, i.e. it is shown how Latin elements would be treated, and how new elements would be chosen. It is apparently pointless to apply various suffixes for particular persons and times in conjugation. In declension five cases would be sufficient, with the vocative replaced by the nominative. Comenius does not twist Latin in this way, but provides an example of how a new language might sound. In the artificial pansophic language there would be no casual words, but each one, and even the smallest parts of speech, would be bearers of meaning. The artificial language should contribute to the unity of the world and to lasting peace.

6. The Panorthosia (The Universal Renewal) shows that already and general correction of affairs is drawing near. The first step must be to forget the past, and all complaints related thereto. The second step will be mutual reconciliation, and the third co-operation. It will be necessary to build a new philosophy taking human thought to a perfect state, a new politics taking human society to a perfect state, and a new, purified religion taking the human heart to a perfect state. This would all be anchored in the establishment of three world assemblies: of the learned, in the College of Light, which will be responsible for spreading the light of education; of politicians, in the world Court of Peace, which will care for justice; and of theologians, in the world Ecumenical Consistory, which will lead the churches to collaboration and the people to God. All must begin the Reformation with themselves, moving on to improve the family, schools, the Church and the State.

7. The Pannuthesia (The Universal Exhortation), i.e. and exhortation of all, i.e. men of learning, the powerful of this world, clergy, Christians, valiant spirits and all people, especially Europeans and in particular the northern kingdoms and the world councils, that they act against sophists, blasphemers and tyrants, and that they carry out those things so requested and required of them.

The Panorthosia is the most interesting, given the far-reaching plans that Comenius proposes. The last book, the Pannuthesia, is the most attractive; it achieved for Comenius a resounding name in international circles as an important pacifist.

The Consultatio is comparable to the great Utopian and philosophical conceptions of Francis Bacon and Tommaso Campanella; it is held back, however, by Comenius’ persistent reference to the Bible and the attempt to classify everything into a predetermined scheme. 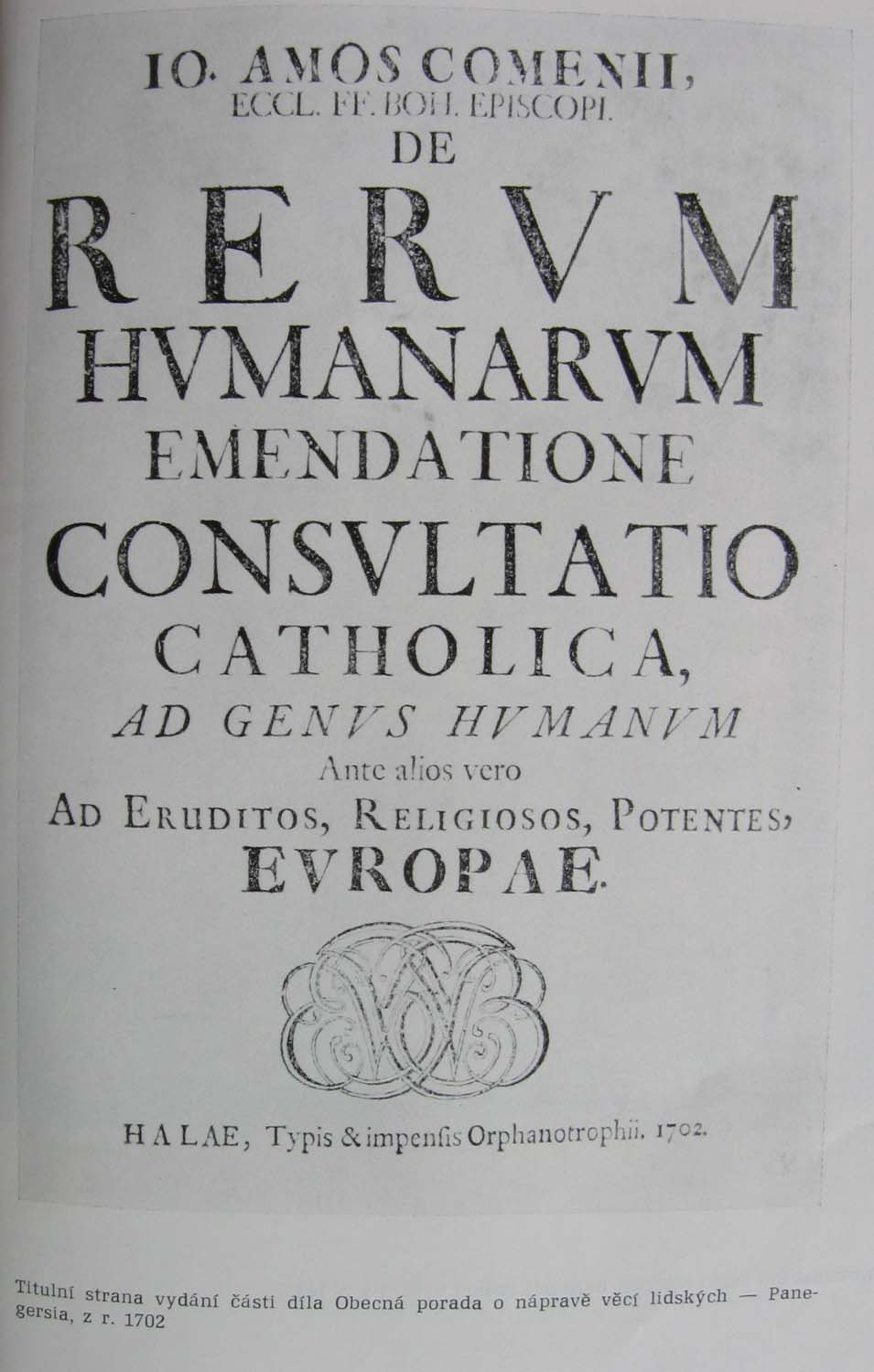