The Lament of Elijah

This is the outline of an unrealised treatise which was to be concerned with the question of the improvement of society. It is closely related to another of Comenius’ remedial works, the General Consultation (the Consultatio).

In 1665 Comenius set down a collection of excerpts and citations from writers and from Scripture, as well as his own notes, written mainly in Czech and Latin but also in part in German, Greek and Hebrew, in preparation for the creation of a work on the improvement of human society. The text is more or less contiguous and discontinuous, filled with additions, corrections and re-workings. The original, which is now kept at the State Archive in Poznań in Poland, was made out with difficulty by Antonín Škarka. The greatest credit for its decipherment goes to Julie Nováková.

The central figure of the Lament is the “third Elijah”, who is to undertake the complete and final improvement of human affairs. The new coming of Elijah was promised by the Matthew the Evangelist (17,11). The first “Elijah” was he that was called the Tishbite, who under the weak King Ahab renewed the cult of the Lord, while the second was John the Baptist (Matthew 17,12-13); the third was expected. Cola di Rienzo saw him in Archbishop Arnošt of Pardubice, while Matthias of Genoa identified Konrád Waldhauser and Milíč of Kroměříž as the third Elijah. If there was more than one third Elijah in history, then the third Elijah of the last age might be plural, in more than one person. Someone must begin the correction of human affairs. The prophet Mikuláš Drabík indicated that this was Comenius – a designation which Comenius also received from other prophets. He hesitated, but ultimately came to conditional belief: the third Elijah will be he that God confirms by a visible sign. Comenius saw this sign in a modern miracle, the perpetuum mobile, for which reason he devoted considerable energy to working on the discovery; when he was unable to bring it to fruition, he conceded that the third Elijah might be otherwise; the third Elijah need not be corporeal, but could be spiritual, bring people inner and moral freedom. This would not, however, be a liberation from the lusts and dependencies of this world as in Seneca, but rather a freedom of conscience and politics, including the freedom of all the estates. It will therefore have a social impact, and even a national economic one. Above all, it is necessary to set aside war, and return the world to peace. The Lament is a work that is Utopian and chiliastic in character. 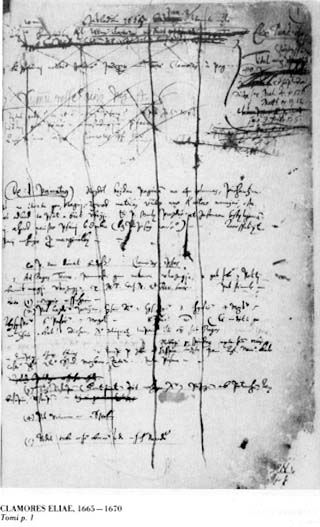