The third admonition. I. To Daniel Zwicker, that he be more temperate in his godless triumph over Christ and the Christian faith. II. To Christians, that they might finally rally. On the occasion of Zwicker’s applauding of his triumph, given even on the day of Passion Sunday

The third and last of Comenius’ polemical replies to the Socinian (Socinians) Daniel Zwicker. Even the tract Socinismi speculum (the Mirror of Socinianism), written by Comenius in connection with his dispute with Zwicker, did not bring the latter to appropriate moderation. He published the new Irenicomastix (the Scourge of Conciliation) against Comenius, who responded for the third time with this polemic that he would not be lured away from the true Christian faith by Zwicker. He wishes to listen to the advice of his friends, and waste no time on a contest that he regards as useless, and which reminds him of the arguments of grandmothers in the street. The attempts of the Socinians to win him for their faith will come to naught, Nevertheless, he regards it as necessary to fight the Socinians to the end not only in front of the Church, but also in front of the whole educated world, for which purpose this reply is intended. See also the entries on the De irenico irenicorum and the De Sociniano irenico. 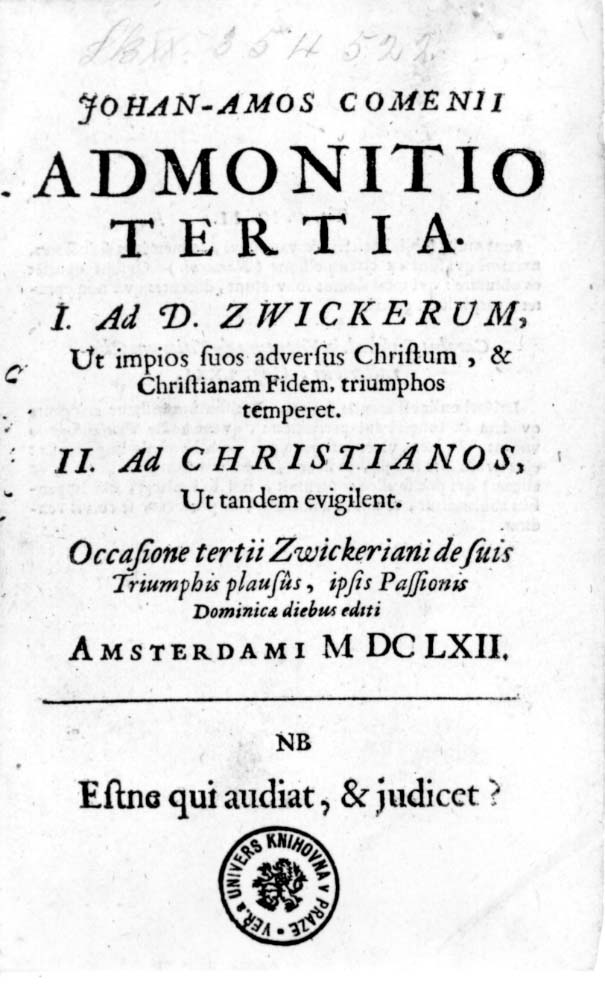