Addenda to the Physics

Editions:
1663 Amsterdam (in the third edition of the treatise Physicae synopsis)

1896 Giessen (J. Reber, together with the Physicae synopsis)

An essay appended to the last publication of the Physicae synopsis (Overview of physics), in which Comenius gives documentation and evidence in support of his natural-philosophical views.

Comenius wrote the Physicae synopsis (the Physica) as a textbook for students at Leszno, working into it his material on nature. The treatise was republished several times, and was successful, but also met with criticism. It was for this reason that, among the dozens of works released to the public in 1663, Comenius issued a new edition entitled the Physicae ad lumen divinum reformandae synopsis (Overview of physics, as it must be refashioned in the light of God), in which he not only revised the language but also the material, taking account of several of the most recent discoveries in the natural sciences where he regarded them as safely proven. At the same time he responded to his critics in the Addenda, in which he justified his research methods.

In the introduction Comenius relates that he could not devote the proper care to the original edition of the Physica due to personal issues in his life, and for this reason complemented it in chapters II-V of the Addenda and possibly elsewhere. According to Comenius there three principles in the world: the material, the spirit and the light, which exist dispersed in things.

The first principle, the material of the world, is a kind of corporeal material formed from something that has separated from cosmic space and is broken down into lesser forms, such as air, water, earth, stone, wood, meat etc. It is formless, but capable of forming all shapes, that it might fill everything and leave nothing empty, cohesive in the manner of smoke or steam, but nevertheless passable. It is the fundamental basis of the corporeal world, which keeps all shapes.

The second principle, the general spirit or souls of the world, is the primordial strength that maintains and enervates all that is in the world, not a fine powder but a huge spiritual mass, first breathed by God into corporeal materials, appearing as the spirit of salt, sulphur, wine, wheat, wormwood, head of cattle etc., that it might reside in the whole, maintaining it in unity, forming from it individual bodies and corpora according to the appointed ideals, and rationally acting in it and through it. Comenius was here proceeding according to Plato and other authors of Antiquity. The spagyrists (medieval alchemists) held that this is the originator of nature and the driving principle of all that occurs in nature; they termed it simply ‘nature’, or ‘active intellect’.

The third principle, the light of fire, is the prime mover of all that is in the word, giving things motion and support, forming and ornamenting everything. It is the ability innate in things, their own nature, by strength of which all things stand and are, that which can be called the natural initiator.

Comenius’ conception of nature is a linkage of Platonic, Aristotelian and spagyric physics on a Biblical base. 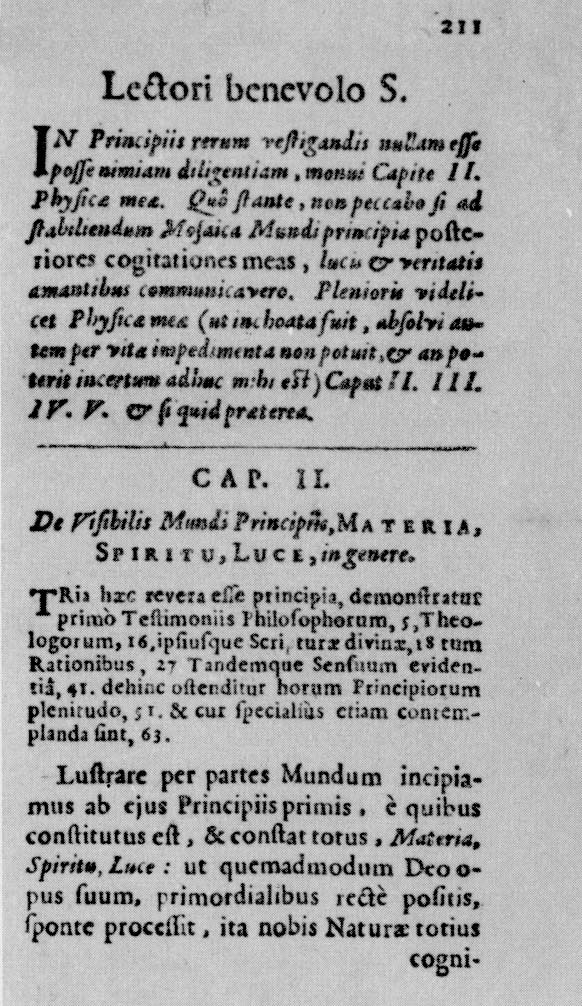