A written catalogue, called in the vulgate the Letter to Montanus

The Amsterdam printer and publisher Peter van den Berge, known as a Humanist under the name Petrus Montanus, Comenius’ friend and publisher of several of his treatises, turned to Comenius several times with a request that he draw up a list of his works. Comenius applied himself to the task, and the result was the letter described above. In this way Montanus was able to meet his marketing aims, and Comenius his literary and cultural. In drawing up the list, Comenius did not supply an austere enumeration of his works, but in a unique manner elucidated the progress of his works from their beginnings right down to the time of writing. In the letter he is replying not only to his friend, but also to the broader reading public. He speaks of his original intention to write only in the Czech language for his own nation. He mentions pleasurable works, his attempts at Czech quantitative poetry, didactic, philosophical and historical works, polemic tracts and his pansophic leanings. He indicates what he was able to achieve in his endeavours, and where his efforts foundered, and complements his explanation with points of interest and rare information as to the circumstances under which some of his writing originated. The letter to Petrus Montanus is the first attempt in Czech literature to provide a critical overview of the author’s own literary activity, memoirs, literary reminiscences or a literary self-portrait. It is also significant in that it provides good information for scholars on the classification of Comenius’ works into particular literary categories. 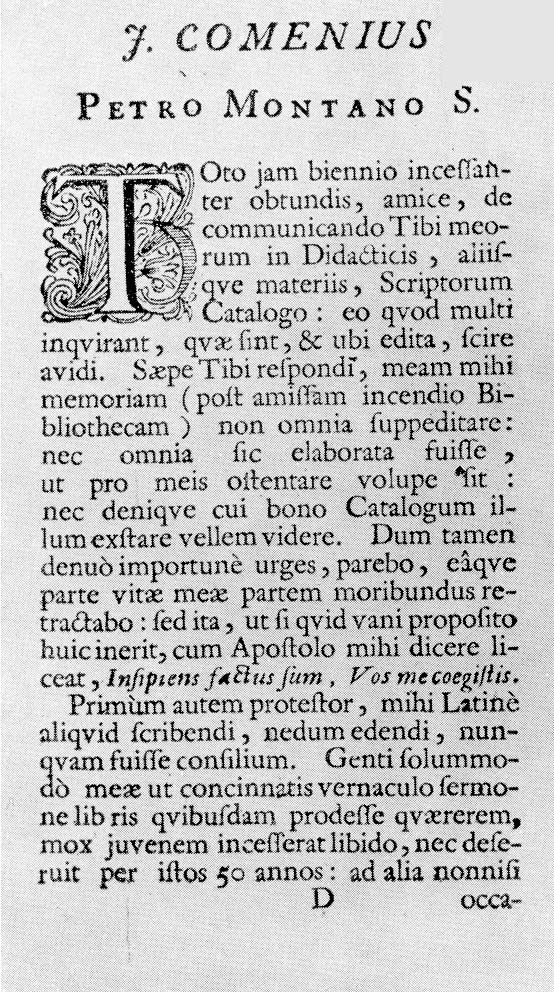