To the right and the left, that is the Struggle on the part of faith in Christ the God-Man against the ravings of the Marcionites (who reject Christ’s humanity). Fought by Jan Amos Comenius

This is Comenius’ denunciation of the teachings of Pavel Felgenhauer, supporting the humanity of Christ, with consideration of the opposite extreme of Socinianism.

It fell to Comenius, who as one of the Bohemian Brethren recognised the divine and human essence of Christ, to meet and contend with the teachings of Socinianism (the Socinians), who disputed the divinity of Christ and the teaching of the Holy Trinity, and recognised only Christ’s human essence. In 1637 the Socinian Melichar Scheffer published the Latin treatise Quaestio, utrum Christus propria virtute a mortuis resurrexit, an resuscitatus a Patre (The Question, of whether Christ rose from the dead by his own strength, or whether he was raised up by the Father), which caused a scandal among the Brethren. They called on Comenius to respond to Scheffer’s text, which he did first in German and later in Latin replies under similar titles to Scheffer’s (the Antvort and the Utrum Jesus).

Soon after denouncing Scheffer, Comenius was required to stand against another extreme, this time the teachings of Pavel Felgenhauer, a Czech cleric living in exile who recognised only the Divine nature of Jesus Christ, and who fought for the soul of his acquaintance, the Czech alchemist Daniel Stolcius, settled in Gdansk.The latter sent Jan Amos some of Felgenhauer’s text from that city, with a request for their assessment.

Many of these were accepted positively by Comenius – criticisms of the Church and schools, ardent piety, compassion for the poor, efforts at peace and the expectation of God’s Kingdom. In a letter of 1639, though, Comenius warned Stolcius against one thing, and requested that he shun it – Felgenhauer’s erroneous teachings. Felgenhauer denied the Son of Man credit for His life, suffering and resurrection, because he understood Christ to be a cosmic spirit and not a man. The warning to Stolcius, however, came too late – the latter had already left the Brethren (the Unitas Fratrum) to join Felgenhauer’s sect in Gdansk, to which leading nobles from among the Czech religious exiles also belonged. Stolcius passed the letter sent to him by Comenius to Felgenhauer, who requested a “purely theological” argument against his teachings. Stolcius then sent the letter that he had received from Felgenhauer to Comenius, with the assurance that he, Stolcius, would return to the Brethren in Jan Amos could counter Felgenhauer. Comenius confounded Felgenhauer’s heresy in a rather commonplace theological manner, but noted that to do so had cost him three weeks of valuable time. This second letter from Comenius to Stolcius (the analysis of 1640) remained, like the first, unpublished, but fulfilled its purpose: Stolcius returned to the Brethren and Felgenhauer fell silent.

Neither the Socinians nor the Marcionites desisted, however. The latter were the Marcion of Sinope, a Gnostic of the second century AD, who was the founder of the teaching that Christ had only an apparent body, and that his death was illusory and not real. Years later, after Comenius’ stay in Amsterdam, it happened that in 1658 Lord Heinrich von Schoellen, a “vigorous warrior of Christ”, was assailed by the Socinians, and in 1660 by the Marcionites. Schoellen asked Comenius for support, in the form of the publication of his two letters to Stolcius in 1639 and 1640. Comenius replied that the letters had disappeared with others of his books. Von Schoellen obtained the letters from Hungary, and asked Comenius that they be printed. Comenius might have preferred peace in his old age, but there was clear benefit in this business and he published the letters as the treatise A dextris et sinistris. The title makes clear that it fights against heresy on both sides: against the Photinians, forerunners of the Socinians, who rejected the divinity of Christ, and against the Marcionites, who did not recognise the human nature of the Saviour. By striking to both sides, the middle course is best held. Comenius judged that the resistance to Socinianism (Socinians) must be fiercer, as they undermine the very foundation of Christianity. The work is devoted to its inspiration, von Schoellen. 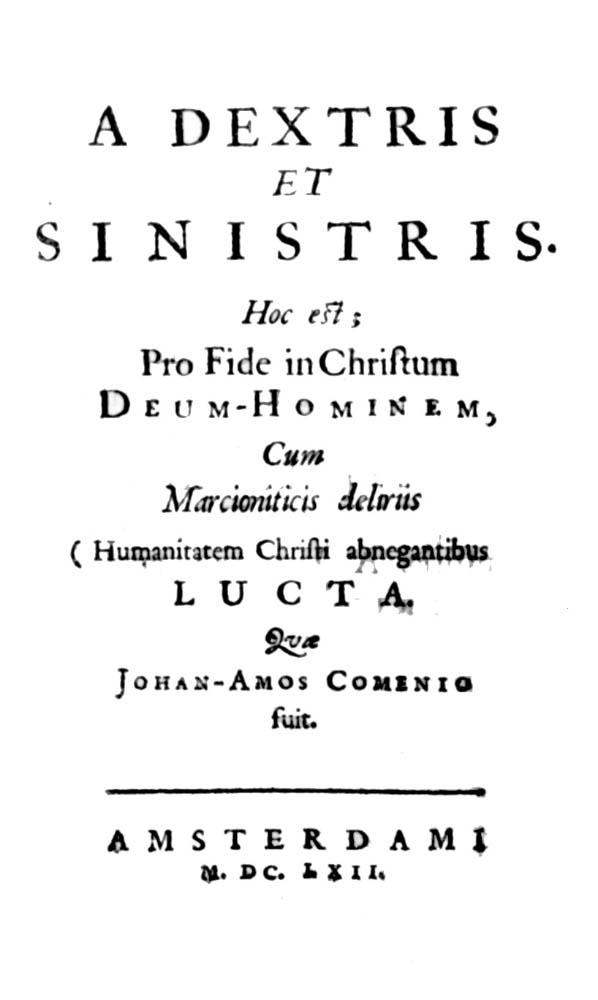